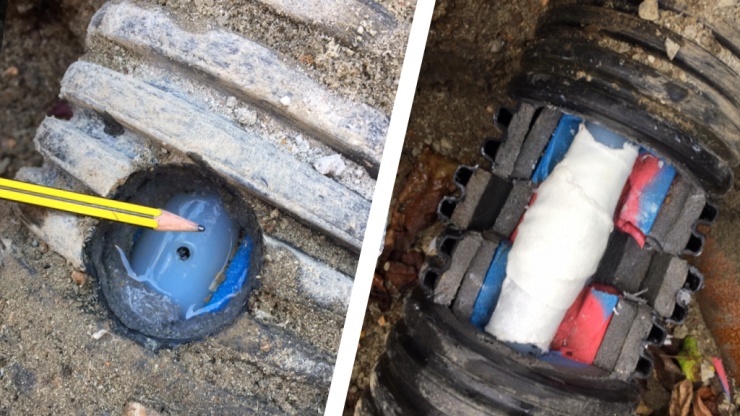 After contractors accidentally drilled through an underground heating pipe on a farm in the United Kingdom, a complicated repair involving a lot of cutting away of pipework and lagging looked in store until a SylWrap Pipe Repair Kit was employed.

Building works were taking place in a paved yard between a set of buildings when contractors came across what they thought was a disused drainage pipe.

Once they’d pierced the pipework, they realised that it actually contained two insulation lagged pipes running from an outbuilding to the main building on the farm, carrying with it the farm’s source of hot water.

The repair that would be required to the farm heating pipe initially looked expensive and complicated. A significant portion of the outer pipe and the lagging would need to be cut away in order to gain access to and either repair or remove the damaged inner piper.

The contractors instead decided to use a SylWrap Universal Pipe Repair Kit to fix the damage. The Universal Kit is WRAS approved which means that it was safe to use on domestic drinking water coming into the farmhouse. It is also effective on extreme temperature applications of up to 200°C.

Firstly, the leaking pipe was sealed using Wrap & Seal Pipe Burst Tape. Wrap & Seal stretches by 300% and fuses into a solid rubber band, plugging the leak. It was then overwrapped with a SylWrap Pipe Repair Bandage, which is water-activated and sets rock hard in 30 minutes to create an impact resistant layer.

Because of the ease with which the products in a SylWrap Universal Kit can be used, the contractors were able to repair the pipe on the farm without having to remove anywhere near the amount of lagging as they would had other repair techniques be employed.

This allowed them to save a considerable amount of time and money by carrying out a quick repair, not to mention reducing the amount of water lost through the leaking pipe on the farm.

Had the farm been concerned about similar problems arising in the future, then they could have taken on a SylWrap Pipe Repair Contractor Case. Each case contains enough products for sites and companies to carry out up to six repairs quickly and easily with no formal training.