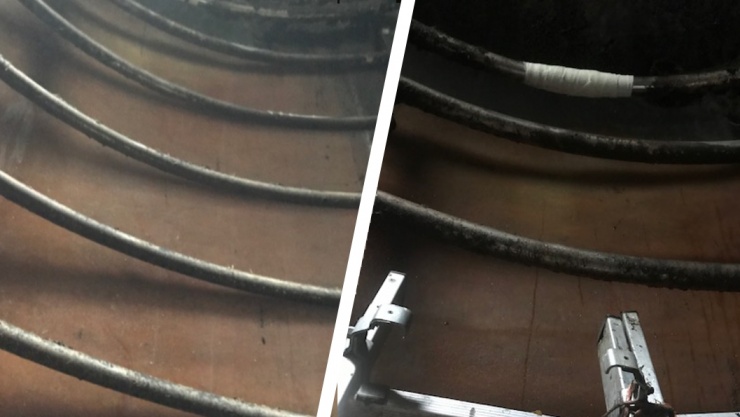 A stainless steel pipe located at the top of a biomass power plant heating tank on a farm in Norfolk breached by debris inadvertently entering the tank as part of feedstock undergoes a flexible and lightweight repair carried out from the top of a 20 feet ladder.

Multiple stainless steel pipes were located around the inside of the biomass power plant heating tank, where the farm mixed feedstock with liquid digestate and warmed it before adding the feedstock into the main digester, making the fermentation process more efficient.

The damaged pipe was towards the top of the tank. It had become breached by small pieces of farmyard debris which had been inadvertently picked up during the formulation of the feedstock from farmyard waste and dropped into the tank from the inlet above.

To repair leaking pipes, the farm normally welded. This though was not feasible in the heating tank because the pipe was in a confined space and could only be reached via a 20 feet ladder.

Instead, flexible and lightweight materials capable of repairing the stainless steel pipe from the top of the ladder were required to ensure the biomass power plant could return to full efficiency with minimal downtime.

Wrap & Seal Pipe Burst Tape was used to seal the breach in the stainless steel pipe. Wrap & Seal is made from self-amalgamating silicone which stretches by 300 percent, fusing to form a solid rubber band and a high-pressure seal over leak areas.

The Tape was then overwrapped with SylWrap HD Pipe Repair Bandage. SylWrap HD is a composite repair wrap with a water activated resin. It sets rock hard in minutes, providing an impact resistant layer of protection to the initial repair.

Both Wrap & Seal and SylWrap HD are temperature resistant to 200ºC, enabling the repair to withstand conditions within the heating tank.

To further protect the pipe from any future debris entering the tank via feedstock, a steel deflector plater was fixed to the top of the SylWrap HD.

Completing the repair took less than 30 minutes, enabling the biomass power plant to make a rapid return to full working order and at a fraction of the cost of replacing the damaged pipe.

The ease with which SylWrap products can be used meant that the repair was carried out by the farm’s own maintenance team, negating the need to hire contractors.

Since completing the repair, the head engineer on the farm has begun looking at other ways in which SylWrap might be used for repair and maintenance tasks with the numerous pipes which keep the site functional.

Keeping a SylWrap Pipe Repair Contractor Case on-site would allow the farm to make up to six emergency live leak repairs as soon as problems arise.

Farm and agriculture is an industry which can also benefit from the Sylmasta Pipe Repair System, designed to refurbish and strengthen pipework before leaks can occur, extending the lifespan of critical infrastructure. 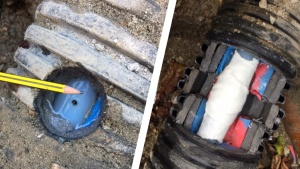