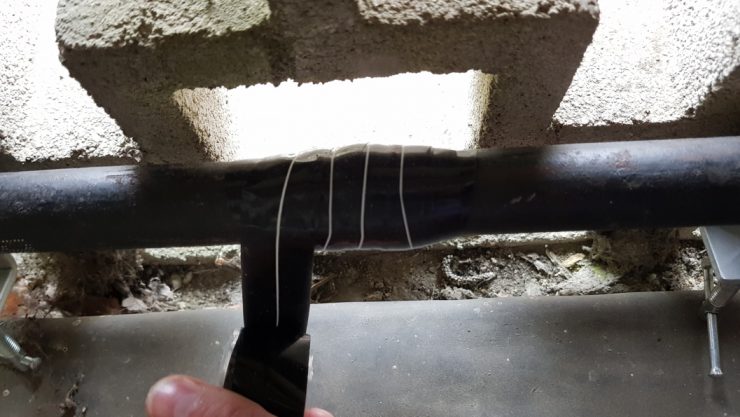 A property owner makes a live leak repair to a 20mm malleable iron water supply pipe despite the leaking section being located in a severely restricted space close to a wall, which made wrapping the pipe challenging.

A small hole had developed in the pipe, facing towards a brick wall outside a domestic property. Water was escaping at 3 bar pressure and flow through the leaking section could not be isolated.

Because this was a live leak, epoxy putty was ruled out as a repair material. Wrap & Seal Pipe Burst Tape would have to be used, even though the restricted space meant that the tape could not be stretched by the 300 percent required to guarantee a high-pressure seal.

Wrap & Seal was anchored 50mm to the right of the leak and held tightly to the pipe by the property owner using their thumb.

They then stretched the tape as far towards them as space would allow with their free hand, pulling it under the pipe and up through the gap between the pipe and the back wall.

As the first wrap around was completed, the Wrap & Seal was stretched halfway across the tape still being held to the pipe with the thumb. This overlay anchored the tape firmly to the pipe.

The wrapping process continued to follow the stretch, under and up technique with a 50 percent overlap. Once the end of the Wrap & Seal roll was reached, the pipe was dried off. No more water could be felt, denoting a successful repair.

Despite the restricted space meaning that Wrap & Seal could not be stretched to its maximum, the self-amalgamating silicone still fused effectively to form a solid rubber band capable of holding the 3 bar pressure.

Wrap & Seal has WRAS approval, meaning it is certified as safe to use on pipes and fittings carrying drinking water. This was another consideration before the selection of a sealing product.

Several weeks after the repair and the property owner told Sylmasta that he was pleased to have overcome the initial challenges caused by the restricted space, making a repair at the faction of a cost of hiring a plumber. 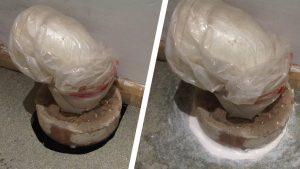 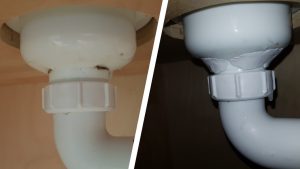 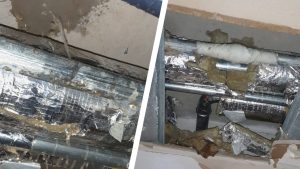