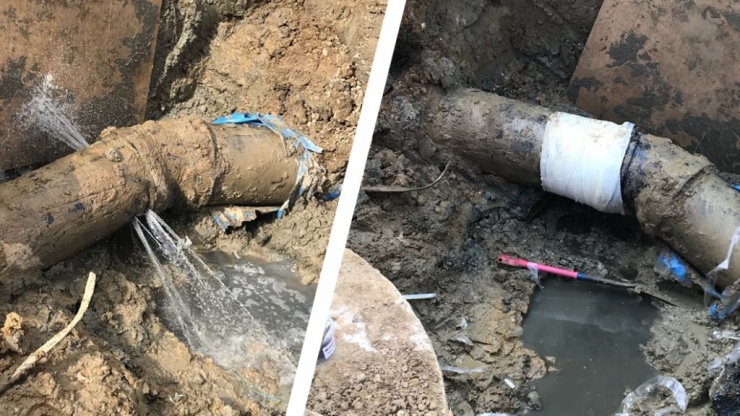 Contractors carrying out major infrastructure improvements mistakenly believed that the steel contaminated water pipe in question was decommissioned and due for removal. In fact, it was one of the most important pipes on site as it was connected to all the waste treatment ponds.

Once the pipe was breached, there was no feasible way to turn off the pressure. To add to the problems, a large amount of wastewater was now escaping from the damaged pipe via a highly pressurised leak.

This leak had potentially costly and embarrassing consequences, unless it could be sealed quickly. As a result, a rapid emergency wastewater pipe repair method was required.

The wastewater treatment plant was located less than one hour from Sylmasta HQ and as soon as the need for a rapid response became apparent, Sylmasta technicians rushed the products required to the site where they remained to provide technical assistance.

Wrap & Seal Pipe Burst Tape was used to repair the breach in the wastewater pipe. Wrap & Seal is made from self-fusing silicone and stretches by 300 percent, forming a solid rubber band to seal live leaks.

Several Wrap & Seal tapes were required because of the pressure of the wastewater pipe. Using multiple tapes can create a repair resistant up to 30 bar as the tapes bond to each other in the same manner as a single tape fusing.

Once the leak had been sealed, the initial repair was overwrapped with SylWrap HD Pipe Repair Bandage. SylWrap HD is a composite wrap with a water-activated resin which sets rock hard in minutes.

SylWrap HD reinforced the repair made using Wrap & Seal by providing an impact resistant layer over the pipe, creating a permanent solution.

Within an hour of Sylmasta being on-site, the breached contaminated water pipe had undergone a permanent repair at a cost to the contractor of less than £300, including additional SylWrap HD to protect other pipes during the improvement works.

This was a drop in the ocean compared to how much a solution would have cost without SylWrap. The site may have been forced into a shutdown to isolate the pipe and drain the connected treatment ponds so that replacement pipework could be installed.

A combination of a new pipe, the labour costs of installing it and the associated loss of earnings during the shutdown could have turned the whole process into an expensive affair running into tens of thousands of pounds.

The speed of a SylWrap repair also prevented a serious environmental incident developing. This could have been damaging in monetary terms through the clean up operation and possible fines, and for the reputations of both the treatment works and the contractor involved.

A day after the repair had been completed, the wastewater treatment plant manager emailed Sylmasta to say: “Thank you so much, the pipe repair worked a treat.”

Being able to react quickly to unexpected leaks and bursts in wastewater treatment plants minimises the impact that such incidents can have in environments where contaminated water is prevelant.

Sylmasta supply SylWrap Pipe Repair Contractor Cases to the wastewater industry to enable rapid live leak repairs to be made as soon as problems develop.

The Case contains enough products to make up to six live leak repairs in less than 30 minutes without the need for any formal training. It is easy-to-store on site, meaning that wastewater treatment works simply reach for their Case, where they have everything they need to make fast repairs. 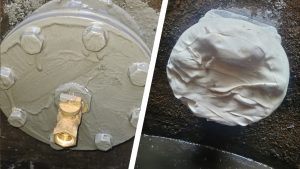 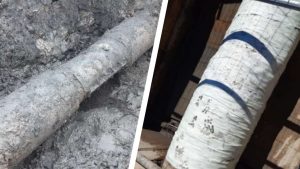 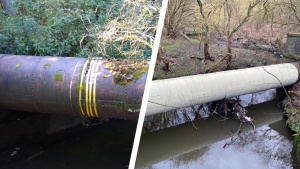 Pipe Bridges Lifespan Extension Through Leak Repair & Reinforcement
A utilities company repair and reinforce two 20 metre pipe bridges leaking sewage from corroded joints into a stream below, extending the lifespans of the structures