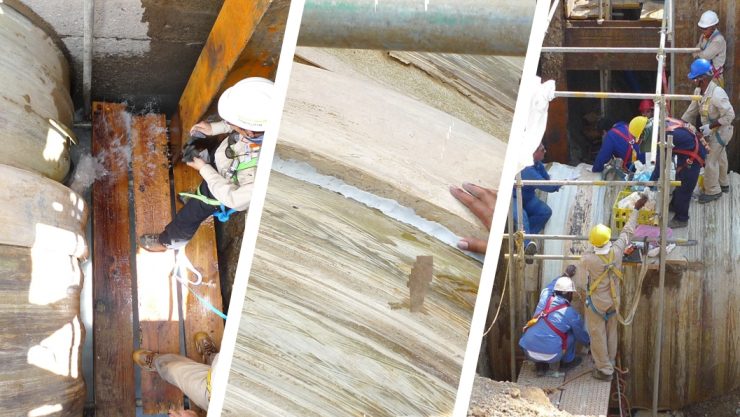 Problems during the installation of a 3 metre diameter FRP discharge line caused gaps to appear between a connecting ring and the partially buried pipe, leaving a desalination plant needing a repair method to seal and reinforce the line before the facility could go online.

The FRP line was being installed as part of construction of a new desalination plant in Saudi Arabia. The purpose of the pipe was to return discharge water not purified into fresh water during the desalination process back to the Red Sea.

Problems during installation of the line meant that one section was not connected properly. This was only noticed once the pipe was pressurised and water began escaping.

Flow was immediately shut off but the size of the pipe meant that the chamber housing the leaking section became flooded. Once drained, a scaffold was erected to inspect the pipe and minimal flow restored to identify the problem area.

Significant gaps were discovered at both ends of a 310mm wide ring connecting the line together. These had to be sealed before the line could be put into service, a repair made particularly challenging as it had to be carried out whilst the FRP pipe remained partially buried.

Flow was again shut off to allow gaps in the pipe to be sealed using Sylmasta AB Original Epoxy Putty. AB Original was chosen because its two hour working time was better suited to the hot climate.

The putty was mixed by hand and pushed into the gaps between the connecting ring and the pipe. It hardened to seal the leaks, arresting the initial issue with the line.

Normally, the second stage of repair would have involved reinforcing the areas sealed by AB Original, using a SylWrap HD Pipe Repair Bandage to create an impact resistant sleeve around the line.

However, it was not possible to wrap SylWrap HD around the line as the base remained buried. Excavating the pipe fully was not an option and so the plant needed an alternative method of reinforcement.

It was decided to use Sylmasta E190 Brushable Epoxy and Fibreglass Tape to build a composite patch repair over the line. E190 was painted over the section of pipe which had been sealed and strips of Tape cut to the required size and pressed into the epoxy.

The E190 soaked through the Tape, attaching it to the pipe. Another coating of E190 was applied on top, with the open weave of the Tape allowing the epoxy to saturate the fabric.

Now, the resin soaked Tape constituted a composite wrap similar to a SylWrap Bandage – the crucial difference being that it could be layered over the pipe rather than wrapped around.

Multiple layers of Fibreglass Tape were added to the repair and coated with E190. The application continued in this manner until the final layer of Tape was covered with a last coating of E190 and left to cure.

E190 has a working time of 30 minutes and a full cure of 24 hours. The repair and reinforcement of the pipe was completed within 36 hours by shift teams working through the night.

The line was put back into service with limited pressure to test that the repair had been a success. Once it had been established that water was no longer escaping from the connecting ring, the FRP pipeline was buried.

Several months later and construction on the desalination plant was completed. The facility went online with the FRP discharge pipe in full working order. 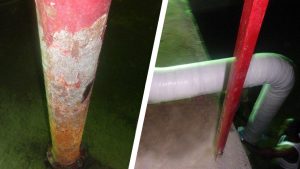 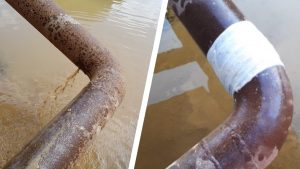 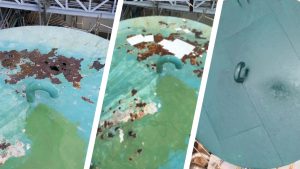 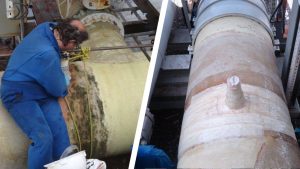 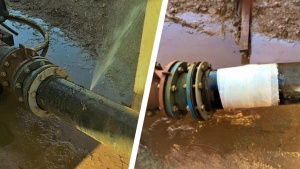 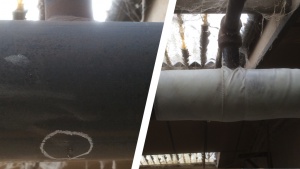