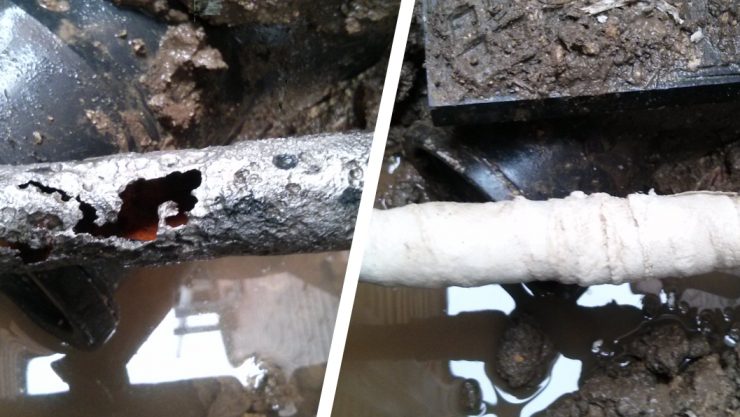 After corrosion caused cracks in a 90-year-old malleable iron water supply pipe, a property owner needed a repair method as the age of the pipe meant replacement fittings were no longer manufactured, leaving his only other option as digging out and replacing the entire line.

The 70mm malleable iron pipe connected the domestic property to the public water supply, so its upkeep and maintenance was therefore the responsibility of the property owner.

They were alerted to a potential leak, after which excavation of the pipe revealed that corrosion had caused an awkward sized, large crack and several smaller holes.

Because the pipe was 90-years-old, replacement fittings of the correct size and type had long since stopped being manufactured. The property owner had to find a repair method, otherwise the entire section would have to be dug out and replaced at considerable expense.

Pressure to the damaged section could be isolated, and so a SylWrap Standard Pipe Repair Kit was suitable for the application.

The products in the Standard Kit have WRAS approval, meaning they are certified as safe to British Standards for use with drinking water – a vital consideration for a water supply pipe.

Before the repair began, the malleable iron pipe was cleaned and dried as best it could be. Superfast Steel Epoxy Putty Stick was used for the first stage of the repair, sealing all breaches in the pipe.

Superfast Steel is a fast-working putty in an easy-to-use stick format. Enough putty was cut off from the stick, kneaded by hand and pushed into the smaller holes, where it hardened within five minutes to seal.

For the larger crack, Superfast Steel was formed into a disc bigger than the crack to guarantee that the entire leak could be covered. The disc was stretched over the damage area and its edges pushed down, forming a good seal with the surface of the pipe.

Once the putty had become firmer but not fully cured, a SylWrap HD Pipe Repair Bandage was activated with water and wrapped tightly around the repaired section, compressing the putty into any remaining gaps.

SylWrap HD sets rock hard in minutes. When cured, it provided an impact resistant protective sleeve around the pipe to strengthen and protect it from further breaches.

Following the completion of the application, pressure was restored to the water supply line. The pipe had ceased leaking and the line was re-buried.

Completing the repair had cost under £25 including delivery of the SylWrap Standard Pipe Repair Kit, a drop in the ocean compared to the excavation and replacement of the entire line.

The property owner contacted Sylmasta a few weeks later to express their delight at the ease and speed with which the application had been completed, saying, “The repair went fantastically well.”