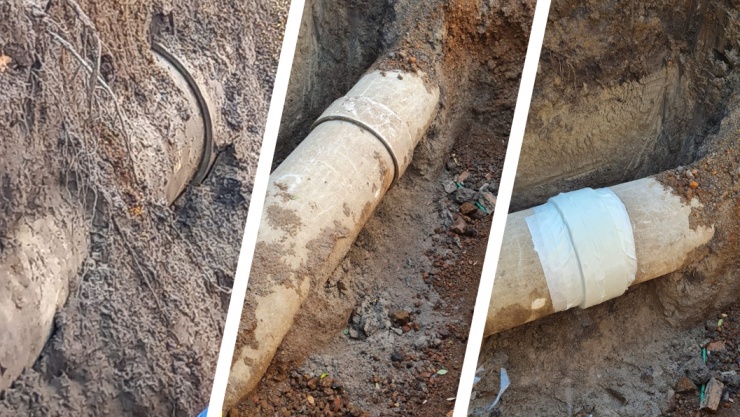 A water utility company in Mexico discovered that a 600mm asbestos cement pipe buried underground was leaking from both ends of a sleeve, requiring a repair method flexible enough to be applied in a confined trench dug to access the problem area.

Maintenance work had been taking place on a 500mm pipe when the water utility company noticed a failure in a buried 600mm asbestos cement parallel line.

The pipe was leaking from both ends of a sleeve. Replacing the section would have been difficult as the pipe passed under a building 10 metres away from the leak area.

To reach the asbestos cement pipe, a trench was dug with 500mm of room on one side and 1.7 metres the other.

There was minimal room between the pipe and the ground, meaning that any repair method had to be effective even when applied in confined space.

Superfast Copper Epoxy Putty was used to plug the gapping between the sleeve and the surface of the pipe through which water was leaking.

The Putty was kneaded by hand and pushed into the gaps at both ends of the sleeve. After 10 minutes, it hardened to seal the spaces and prevent anymore fluid from escaping.

For reinforcement, each joint was then overwrapped using Wrap & Seal Pipe Burst Tape. Wrap & Seal is made from self-amalgamating silicone which fuses to form a solid rubber band over leaks.

The Tape is most effective when stretched by the maximum 300 percent of its length. Despite the space constraints in the trench, this was possible with the pressure resistance of the repair being strengthened.

SylWrap HD Pipe Repair Bandage was then used to encompass the entire sleeve. SylWrap HD is a water activated composite repair wrap which sets rock hard in minutes, providing an impact resistant layer of protection before the pipe was re-buried.

The repair was a complete success. The water utility company were impressed with how straightforward the application was and the technical assistance provided.

This included adding additional Superfast Copper as part of the SYL-PRO-50-150 SylWrap Pipe Repair Contractor Case supplied for the repair.

With the water utility company now investing in leak detection technology, the Contractor Case is the ideal product to take advantage of being able to rapidly identify leaks and bursts on their network.

It contains enough products to make up to six live leak pipe repairs and is easily stored on-site or on the van, allowing contractors to keep close to hand everything they need to fix problems as soon as they are discovered. 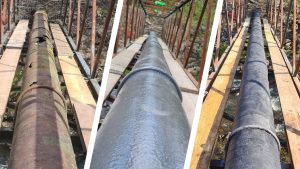 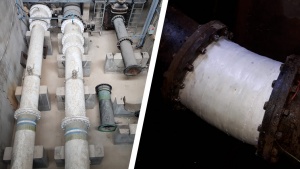